AJPI・AJFI products were expanded with their going into full operation

AJPI, which is constructed based on the NCREIF's index methodology, covers core real estate investment market more widely, and is expected to be widely used by global and domestic investors as a Japan's major property index.

The classification of AJPI・AJFI by universe and indices

ARES initially treated the calculation and release of AJPI and AJFI as experimental. During the experimental stage, the activities for the increase in the number of data contributors, the detailed investigation and the enhancement of the calculation logic, and discussions about the possibility of additional services and products, were conducted.

Now ARES starts the full-scale operation of AJPI and AJFI because the number of data contributors reached over 20 and the detailed inspection and enhancement of the calculation logic.

The new out puts after starting full-scale operation

With the turning point of starting full-scale operation of AJPI and AJFI, some new sub-indices and data formats showing the summary of the latest data are added to AJPI and AJFI outputs. The new out puts are as follows.

AJPI・AJFI Summary Sheet ; the standard format of the latest data (English and Japanese) 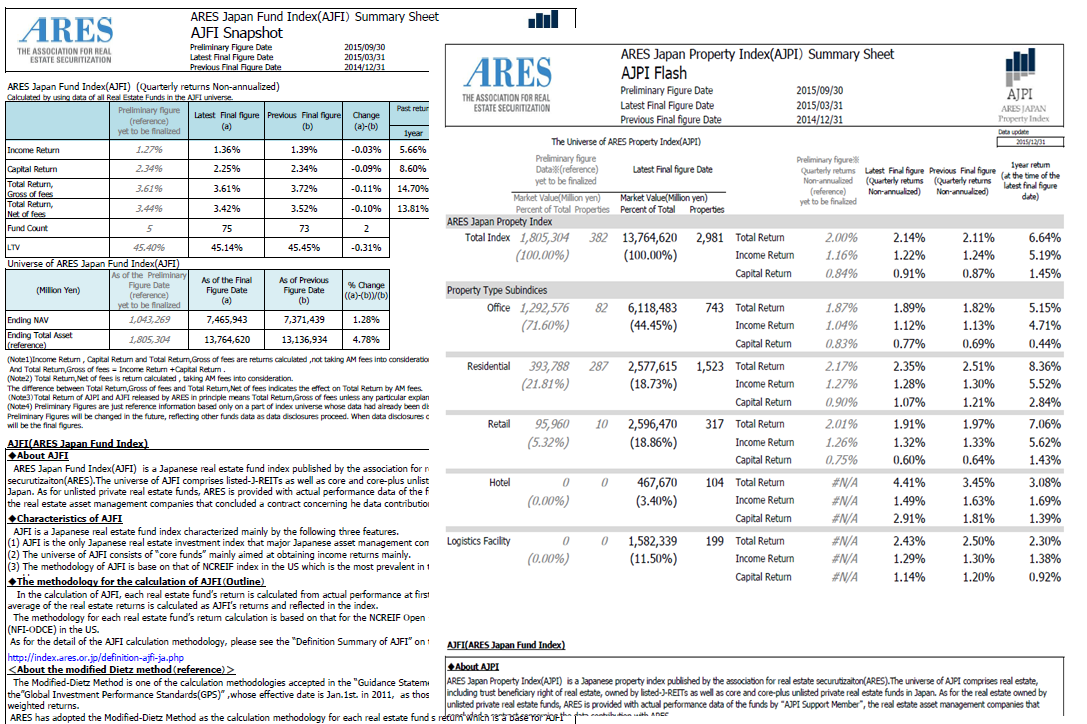 It is expected that AJPI and AJFI are recognized as Japan's standardized indices and they are wildly used by not only Japanese investors but also foreign investors.

About ARES Index
What Is a Property Index?
Update Schedule and Data Sources
Qualifications for Inclusion in the Index
What is the Core Fund?
Procedures for Mergered Funds
AJPI Support Members